Words in my mouth

Late last year I gave an interview to a US-based British journalist who said she was going to sell a story about me to a major magazine in the UK. She expressed surprise and dismay at how The Daily Mail treated me with their sensationalistic headlines (triggery language in the title, y'all). She said things are different in the UK--subjects of articles even get read-backs before publication, which is nice--and proceeded to conduct a very sensitive interview with me.

The article was supposed to be published in Best in January, then February, but by mid-February I'd heard nothing from the journalist so I contacted her. She said she still hadn't heard when it would be published.

Today I got mail from someone trying to find me on Facebook. She'd read the article in February's issue of Best and wanted to talk about having a similar experience with asexuality. Nice connection, but the fact that the article was already published was news to me. I told her so and she sent me these scans. (You can click them to try to read them, but the scan isn't great.) 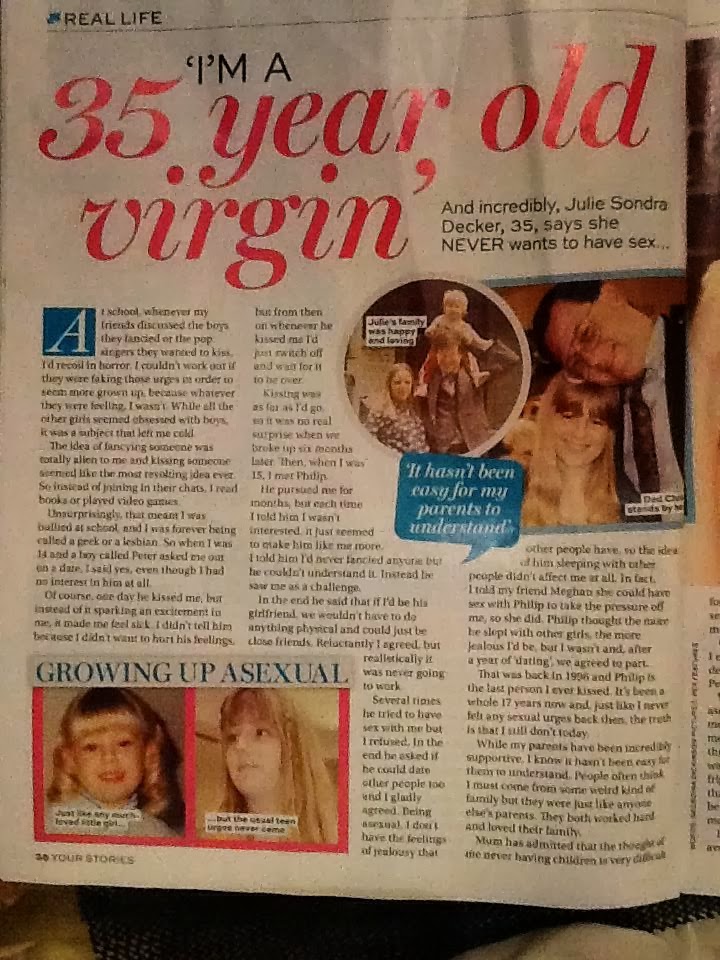 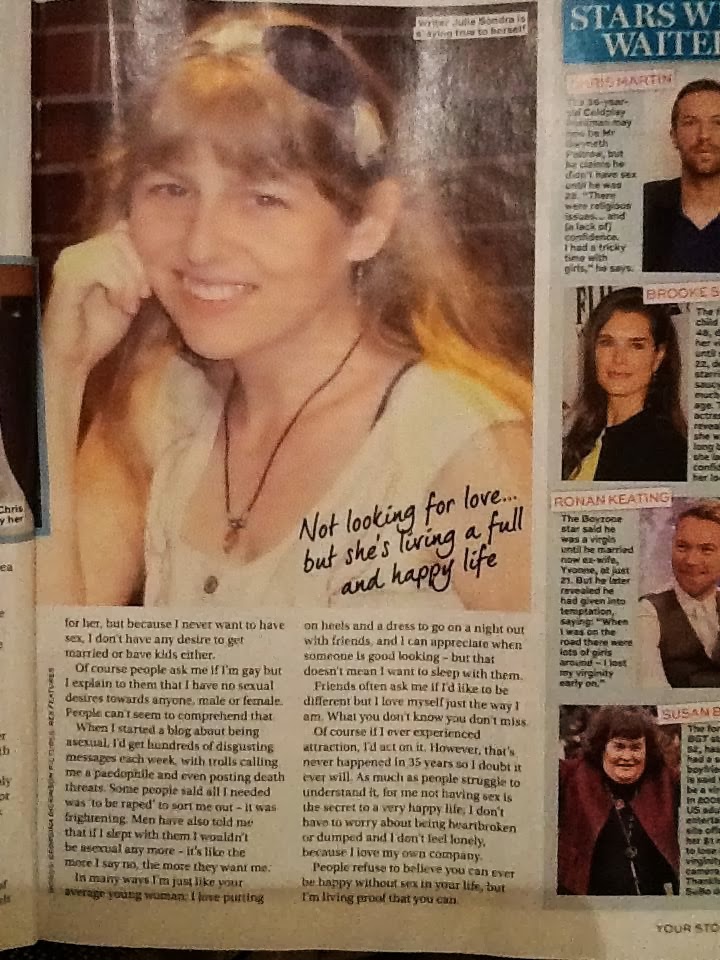 An abbreviated version was published in Best Daily and it is just as terrible. What's so terrible you ask? Well, most notably, what's terrible is that the entire thing was written in first person, as if I had written it, and I have never said and would never say the great majority of those things. It's even full of British writing conventions, like "Mum" and "I never fancied anyone." At least it says "By Laura Millar" on it, but I doubt anyone will realize I didn't write it. (Laura Millar is not the journalist I was talking to. I am still waiting to hear back from Georgie as to how the hell this happened, why I didn't get a read-back, and who's responsible for stuffing so many inappropriate words in my mouth.)

It's not a terribly disrespectful article, and it's not as sensationalistic as The Daily Mail, but I am pretty ticked about its being in first person and how it misrepresents both my life and asexual people in general.

Inaccuracies in the online version:

And in the print issue, there were a few more annoying issues:


The whole thing would have been MUCH better if they hadn't tried to make it sound like I'd written it! I'm used to journalists getting it wrong or having the nuances escape them, but it was extremely irresponsible of them to stuff these words in my mouth. Now it looks like I would say and believe these things, and it kind of looks like I write unnecessarily reductionist twaddle about happiness secrets that I wouldn't dream of trying to generalize.

I know the magazine isn't exactly aimed at those who want to read high literature, but I don't mind that at all; I want my existence and my message to be known to people who wouldn't necessarily go out of their way to watch a documentary about asexuality on Netflix or get a book about the topic from their library. I'm happy it was in Best, but I feel misrepresented. If they'd wanted me to write about my experience and give me some guidelines, holy crap, I would have, and this is NOT even close to what I would have said.
Posted by Julie Sondra Decker at 8:48 PM

Email ThisBlogThis!Share to TwitterShare to FacebookShare to Pinterest
Labels: angsting, asexuality, me in the media, photos