I have an OKCupid profile for making friends.

Before you laugh at the concept of a non-partner-seeking aromantic asexual person trying to use what is ostensibly a dating site for "friends," yes, they ask you to check off what you're there for. I fail to see why so many people mock me for this when I see this on the signup screen:


It's been pretty fantastic over the years as I've used it for that purpose, too. I've made tons of friends and had even more great conversations that didn't exactly turn into lasting relationships, and a few of the people I met through OKCupid have become fixtures in my life.

However, one of the side effects of being on OKCupid is dealing with a TON of rude people who are responding to pictures, not profiles, and secondary in frequency only to the clueless hookup requests are the folks who DO read some or all of the profile and feel compelled to lecture me about something in it. You know, because it's really important that they, a stranger, barge into my life and tell me what I'm doing wrong.

And one of the items in my profile that I have gotten horrible mail about is my answer to the profile prompt "The most private thing I'm willing to admit."

I answered "I fear both success and failure."

For some reason something like eight different people have found that particular sentence to be pretentious and meaningless while trying to sound deep. I don't know why it seems to set off people's BS bells. Because it's absolutely true of me, and it isn't any attempt to lay down a philosophy bomb.

Here's the context in which it was meant:

Right now, I am chasing my dream. You know, the one where I get a book deal for my fiction project. Getting agency representation has theoretically brought me closer, but it's still not a book deal, and there have been some failures along the way. Rejections, you know. There were rejections getting to where I am, of course, and I imagine I will continue to see rejections in the future for various things I try to do. But as long as I don't actually fail, I guess the dream is alive and I'm still reaching for it. It's just true that my success or failure at this is not in my hands anymore.

I've done my part, and now I'm waiting for the right editor at a publishing house to believe in my book and make an offer. When a person is dependent upon someone else's acceptance to take the step she wants to take on the path she's chosen, some of her success is not up to her. I can only keep trying and keep hoping. It's not a matter of believing enough or being persistent enough or working harder. I do believe, and I have been persistent, and I have worked hard; that's how I got here. If someone else's acceptance is what I need next to succeed, I have no control over whether I fail. So I could fail forever.

That's pretty scary. Which is why I say I fear it.

Succeeding is scary too. I am already busy beyond what is comfortable. Many of the things that keep me busy are self-chosen activities, but I consider myself dedicated to them, and they are important to me. I already have trouble finding time and energy to see my friends and family, read as much as I want, work on my creative projects, answer the ridiculous amount of e-mail I get. And if I do achieve the success I want, well . . . there's certainly going to be less time for what I love. There will only be fewer hours in the day. 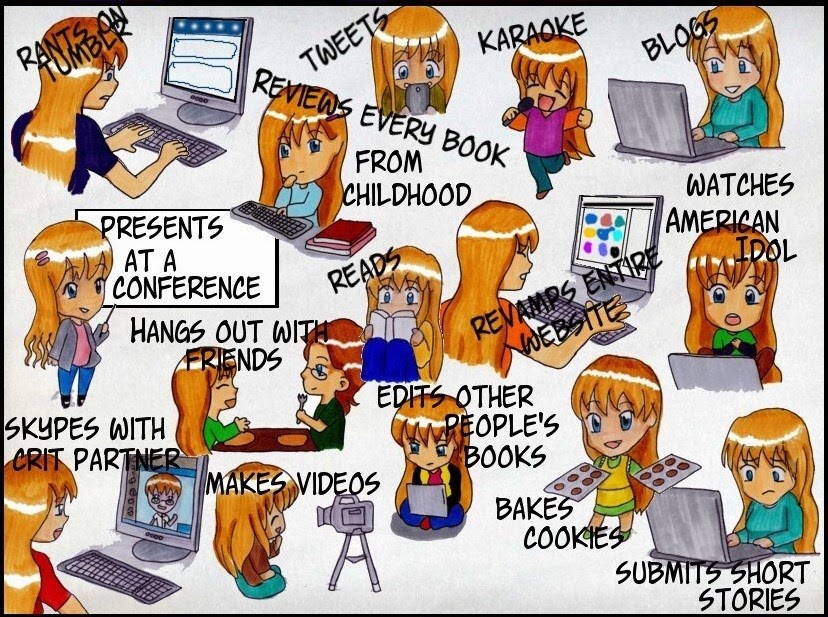 I'm seeing some of this--just as I suspected--with getting a book deal for my nonfiction. I've spent a ton of time on that book (and I haven't even received my edits yet!), not just working on the book itself after getting the deal, but on doing research and preparations for behind-the-scenes stuff (like preparing my list of media contacts and reviewers, for starters). I'm saying yes to virtually every appearance and interview request I get because I think it's kind of a dumb time for me to say no to things when I have a book coming out later this year. And I'm trying to stay in touch with the world so people know what's going on with me and my projects--updating the blogs I write, making videos, creating comic content, preparing newsletters, all that--and it's fun, but it's both time-consuming and somewhat exhausting.

I worry that the obligations and the UN-fun things might become overwhelming, or at least crowd out the fun things more often than I expected or wanted.

But I still want what I want.

I know I don't want to stay here and I'm afraid of getting stuck here, but I'm a little afraid of what's on the other side of the hill, too.

Welcome to life, I guess.
Posted by Julie Sondra Decker at 3:15 PM