Today I'm participating in the bloghop for agency siblings Kelley Lynn and Jenny S. Morris in association with their cover reveal celebration for their book, ROAD TO SOMEWHERE, coming in February from Bloomsbury Spark! Check this out and be sure to scroll to the end for a giveaway they're doing. 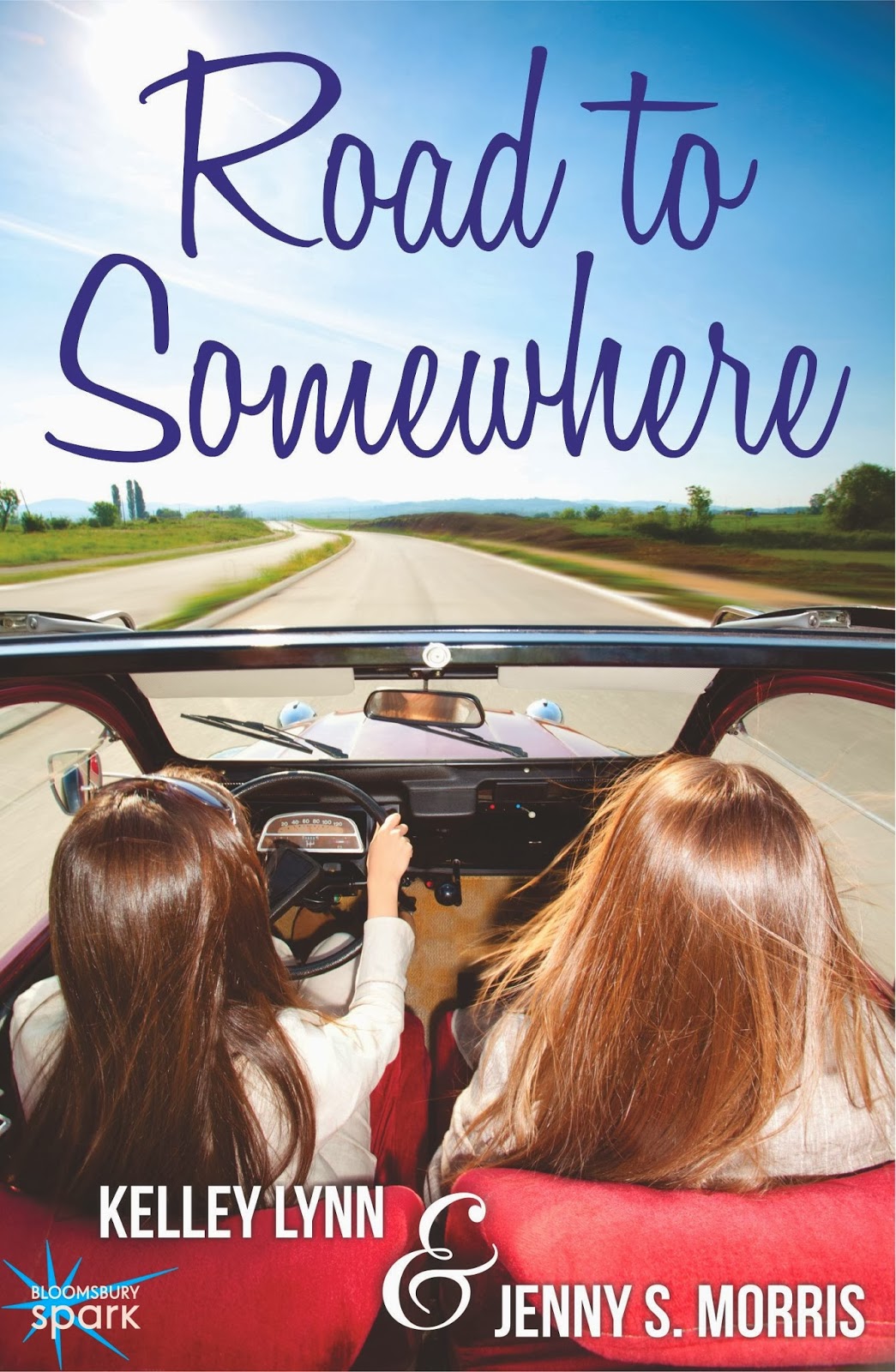 Lovely, yes? And here's a bit about it:

The book has a major sibling theme, so to celebrate its cover reveal, we bloghop participants are sharing sibling stories! And here's one of mine.

I have two younger sisters, Patricia and Lindsay, and while I have a kabillion stories about growing up with them, I'm going to tell one about Patricia and me since whenever I tell this one people seem to love it.

Background: I grew up an eldest sister, but I don't remember being an only child because my sister Patricia was born only a year or so after me. We were raised as if we were twins, almost, but being the older sister did have a couple of perks. I got to do everything first.

I found out as an adult that Patricia found it comforting to have me doing everything first. Starting a new grade was a less anxiety-inspiring experience because if Julie survived it then how hard can it be? I was unintentionally showing her the ropes just by going to school and braving the unknown--since I had no choice--and that was reassuring for her. But it had a drawback.

She was forever being asked, "Are you Julie's sister?" 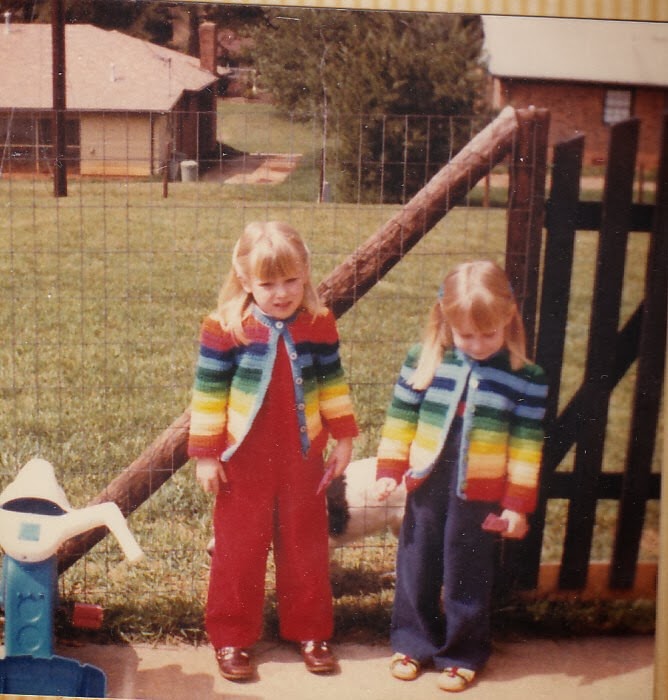 We looked very much alike, and often dressed alike, except I was the red or pink "twin" and Patricia was the blue "twin." Once, at my kindergarten, my mom had come by the school for some reason and my teacher tried to stop her from leaving with me, but it wasn't me at all--it was my sister. The family found it hilarious that people kept thinking we were the same person. But after a while I imagine it got tiresome to be mistaken for me or to be associated with me.

We went to the same school for elementary, middle, and high school. There were a couple scant years when we'd be in different schools, and a couple times she even got to go to a school where they'd never heard of me. I don't know if she liked getting a year off from being Julie's Sister, but it was pretty much still happening everywhere else. Even though we looked less alike at that point. 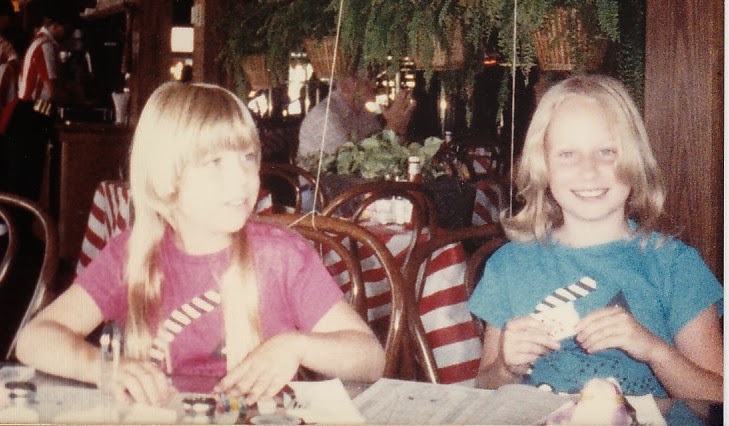 In high school, I don't really remember being asked if I was Patricia's sister, but I'm pretty sure people still asked her if she was my sister. We had a little bit of overlap in classes and friends, and were even taking the same math class at the same time from the same teacher (in different periods) during my senior year. But I was into singing and she was into art, so we had our own circles too. And it helped that we didn't dress alike anymore. Haha.

We went to different colleges, so the whole "are you Julie's sister?" thing was a lot less likely at that point. I went to the University of Florida, and she went to New College. One of the experiences New College pushes strongly for their students is studying abroad; they encourage their students to spend at least one semester in another country. So my sister opted to do one semester at Waseda University in Japan.

On the first day of class, surrounded by strangers in a foreign country, one of her classes was small enough that introductions were appropriate, and some guy responded to her stating her name with "Are you Julie's sister?"

It turned out that the guy who'd asked was the brother of one of my friends, and he happened to be from the United States doing the same sort of thing. Hahah.

My sister moved to Japan after graduating from New College, and I don't think she had this problem again. She married a man she met there and settled down in California, where she also doesn't get asked if she's my sister. We don't have the same last name anymore, either.

But she will never escape being my sister. Bwahahaa. 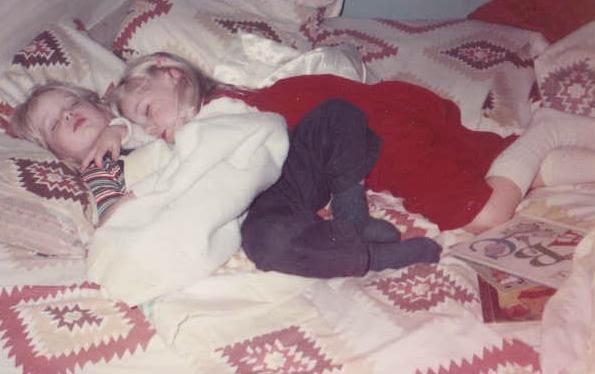 Visit the others who are participating:
Posted by Julie Sondra Decker at 3:00 AM