Whose book sold? MY book sold!

Happy Friday, everyone. I have lovely news for y'all: I have a book deal.

That's right! My book on asexuality is going to be published!

If you want more details about SO YOU THINK YOU'RE ASEXUAL, check out its page on my main site. It gives you the main rundown of what the book contains and its particulars.

We're looking at Fall 2014 for the release. Carrel is a new imprint of Skyhorse Publishing, launching in fall, and I'm supposed to be one of the titles on its maiden voyage. You can read an announcement about it in this Publishers Weekly article. They're primarily a library focused imprint--a new idea in a publishing market that's experiencing some turmoil as the bookstores lose power. Hopefully, by concentrating on library sales for books that people might be more likely to borrow than buy, they can find success. Ideally, my book will generate enough interest that it will later come out on the main label and end up in bookstores. (I don't know that it will happen, but there's a possibility!)

However, individuals will be able to buy the hardcover or the e-book when the time comes. I'll definitely keep people up to date on what they can do to make sure their local library has a copy! But for now, I'm just enjoying the buzz of getting a deal. :)

It's been quite a journey! I began writing the first draft in April of 2012, and in May of 2012 I was finished. (I've said all this stuff so many times that it didn't take long to bust it out.) I wrote a proposal and began querying agents, and got a couple positive responses. I decided to cool off while the considering agents read the proposal and sample chapters.

In August of 2012 I got signed to Michelle Johnson for my fiction, and found myself very distracted--to the point that I failed to follow up with the agents and didn't really notice they weren't responding to me. It wasn't until I went to the Creating Change conference in January 2013--a gathering of LGBT organizers and activists, where I was participating on an asexuality panel--that I decided I needed to jump back into querying.

I sent nudges and queried more agents. One of them was Andrea Somberg of Harvey Klinger, who ended up offering me representation on May 23, 2013. I refined my proposal with her help and on June 6, 2013, we put the book on submission to publishers.

I received three different offers of publication for this book, and they came in slowly during the period from August to October. We had five publishers initially interested, and in some cases the proposal was circulated at meetings or among staff, but oddly enough it was during Asexual Awareness Week that we had everyone's final verdict and could figure out what to do with the multiple offers.

Andrea and I had a little phone conference and discussed what was a must-have and what was a deal-breaker for me. In her discussion with the publishers, we ended up finding the closest match in Skyhorse (though of course I would have ideally liked to get into bookstores at the outset--who doesn't?). Andrea proceeded from there to negotiate with the publishers, and when we finally had a contract everyone was satisfied with, I signed it and submitted it to Skyhorse on November 20, 2013.

If you're interested in what goes into writing proposals and how my submissions process went, one of my YouTube videos discusses it!

I've been steadily working on the book itself throughout this process. An early request for full manuscript readers went out in February 2013 and received 75 volunteers. A request for focus groups to read excerpts went out in October 2013 and received 120 volunteers. As a result of all the fantastic feedback, the book has outgrown its initial estimation of 45,000 to 50,000 words, ending up at nearly 65,000 words and covering a lot more ground. It also includes quote boxes from 20 talented asexual bloggers.

I'm so excited to finally be able to bring a mainstream book on asexuality into the world! If you're somewhat unfamiliar with asexuality and want to read my other writings on the subject, my list of my published articles is here, my interviews in the media are all here, and I have some very informal essays on asexuality on my Tumblr, which is my main asexuality blog. You might also enjoy Asexuality: An Overview--my YouTube video that probably does the best job explaining it.

So what did I do to celebrate, you ask? Not much. I got myself some takeout veggie sushi. 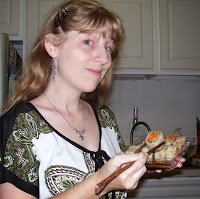 And I may have covered myself in cake but that's another story.
Posted by Julie Sondra Decker at 10:00 AM