I'm back with the Monday blog challenge! The lady in charge is Marie at Mom Gets Real. The questions are right here:

SOMETHING YOU BOUGHT RECENTLY!

Ah, well besides the usual boring things like groceries and birthday gifts for others, I would say the most interesting thing I've bought recently was this: 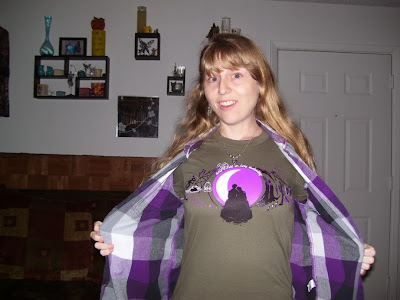 . . . It's a Cecil/Carlos design shirt. For Welcome to Night Vale.

This shirt is awesome for a bunch of reasons. If you don't listen to Night Vale, you should know that it's a pretty awesome podcast that's sort of science fiction/borderline horror, but also sort of funny, and it's narrated by a guy named Cecil. He reports on the weird news of his town, including angels popping by to change an old woman's light bulbs, strange sights in the sky, government conspiracies, and appreciative comments about pizza at Big Rico's. The normal abnormal, you know.

A scientist named Carlos arrives in town to investigate the bizarre things that happen in Night Vale and Cecil falls in love with him from afar. Over the continuing story of the show, that relationship progresses here and there. Night Vale got really popular some months back and one of the cool fan-related events they did to give back was a fan t-shirt contest. A fan designed this shirt! One of the assignments was to make a Cecil and Carlos shirt. But the thing is, no one knows what these characters look like because IT'S RADIO. So I was worried that if a fan drew Cecil and Carlos with recognizable details and that shirt won, it would suggest the creators agreed with that character design and it would become canon. But I like my Cecil without knowing what he looks like! Carlos is sometimes described lovingly by Cecil, so we pretty much know how he looks, but Cecil is totally a mystery.

So I really appreciated that this shirt kept them in silhouette. That way the mystery remains.

Around the lovely couple I see Cecil's radio mic, a Glow Cloud, a feral dog with an extra head, the Arby's sign, some Hooded Figures, a pterodactyl, some messed up clocks or watches, and Carlos's beaker. I'm not sure what the triangles are. I feel like I should know. :/

And the text says "And I fell in love instantly," which is a quote from the first episode. :)

This blog post was supposed to be about something I bought recently, but it turned into rambling about Night Vale. Man. Well, you should be listening to it. :) If I helped introduce you to a new awesome thing, you're welcome.
Posted by Julie Sondra Decker at 5:18 AM