You're not my type

I primarily write speculative fiction, including fantasy and science fiction. So people assume I'm a certain kind of geek. I'm not.

This is a weird place to be in because I am stereotyped by both people within and people outside of those communities.

Here is a list of things I'm expected to like when I say I am a fantasy author:

Most of these things do not interest me at all. A few of them I have dabbled in. A couple of them I like. But I have never played D&D, don't care for role-playing (LARPing or otherwise) and have no interest in trying, do not collect comics (though I've read a few I like), play no video games outside of Dance Dance Revolution, don't much like dressing up, and have zero appreciation for dragons.

I actively dislike most high fantasy and hard science fiction, finding Lord of the Rings to be an island in an otherwise uninteresting genre and making exceptions only if strong characters make it worth it to deal with the stuff I'm really bored by. I don't "get" the Whedon shows (with the notable exception of Dr. Horrible) and have not seen most of Star Trek (but actually did enjoy a couple episodes of Voyager and The Next Generation), every time I watched Dr. Who I was scared or creeped out by it, I dislike Star Wars, can't seem to get into the Marvel thing, don't really watch any TV these days so I have no idea what's going on when my Twitter feed blows up all the time with people freaking out over shows. I've been to Ren Faires and like them, but don't go out of my way to be authentic or attend religiously. And I like a fair amount of anime, but can count on one hand the number of hours I've watched any this year.

I'm not really a "type." It's strange because non-geek folks assume I am into these things without asking and tend to have a pretty judgmental attitude toward geeky pursuits, and then the people I'm friends with--mostly geeks--find it frustrating and baffling that I don't enjoy their favorite things. What's especially perplexing is when the geek-folk simply assume I have context for or interest in their hobbies. 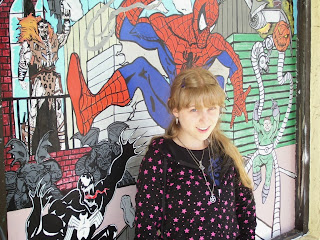 Once I had my photo taken with a cool painting of Spider-Man because I thought it would be funny if I stood in his crotch (though I disliked the one movie I saw and have never read any comics), and someone responded to the picture on a social networking site, assuming I had been shopping for comics inside the place, and invited me to come to his club meeting. In the e-mail, he expected me to be excited about the tabletop games or whatever they do there, and he seemed really confused and eventually pissed off when I told him that wasn't really my thing. (The clear expectation he had for me to share his interests came through to me as a tone of weird entitlement--like "Most people wouldn't post a picture of them with superheroes if they didn't like this that and the other thing that's perceived to be related, so I have every right to talk to you like you misled me!")

Oddly enough, though, I do perceive the geeks as my tribe. I read a lot of science fiction. I can be fannish in a similar way that geeky people are fannish when I do share their interests. I have dressed up for an anime convention in cosplay more than once and have worn period clothes to Ren Faires even though it's not something I pursue enthusiastically. And I do computer-geek stuff, so I speak their language there. But even though I don't want to play D&D with people, when I hear they play D&D, I feel like they're more likely to have something in common with me--maybe they like fantasy the same way I like it, or might want to play Dance Dance Revolution with me, or might be able to geek out in silly ways over things we both like. I understand how they operate, and I approve even if I don't engage.

I don't know how common my half-geek syndrome is, but I don't seem to encounter it often. Anyone relate?
Posted by Julie Sondra Decker at 8:36 PM