The Worst Is Over

I realized something amusing about how I write and I thought I'd share it with y'all.

No matter what stage of the game I'm in, I always convince myself that what I am currently doing is "the easy part," and focus on how hard all the other stages of the game are. Then, as I change to new parts of the process, I can congratulate myself on the parts I've already done (because now the hard work is over, whew!) and put the parts I haven't done yet out of my mind (because I'll tackle the actual HARD STUFF when I get there, right?).

There's another series of book-related troubles I have yet to be frustrated by--edit letters, professional feedback, line edits, contracts, waiting for the release, dealing with the feedback--but I'm sure I'll handle it much the same way. It's like lying on a bed of nails. The reason it works without killing you is that the weight is evenly distributed across a bunch of tiny pokey things. There is no ONE place that's just overwhelmingly hard unless you're trying to handle everything at once . . . and you can't be in that position, at least if you're only working on one book. (Being caught up in several stages of this process with several titles is a different story.) 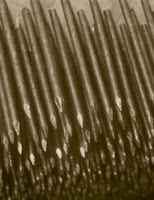 Objectively, if I had to pick one I think is "hardest," I think I would pick the first round of revisions, because that's when you look at what you have barfed up and determine whether it can be salvaged, and then you have to deal with a LOT of mess if you decide in the affirmative. And I mean, I don't write completely indiscriminately or without a care for the future, but I do actively decide not to worry too much about things I know will need to be worried about eventually. It's the only way I can keep the flow going while I'm actively making new content, I think.

But I certainly don't admit that to myself when I'm in the process of first-round revisions. That would throw the whole thing off. :)

Any commenters want to say which part of the process they find most frustrating and how they deal with it?
Posted by Julie Sondra Decker at 12:00 PM