Banned Books Week is this week, from September 22nd through September 28. I read Laurie Halse Anderson's blog and in one of her posts she discussed whether authors should censor themselves in order to avoid getting banned. She concluded that in some cases toning down certain elements does help your book get through the filters and reach the audiences you want it to (you know, like if on a TV show you have to clip out a couple of nude scenes so larger audiences can still see it, perhaps it's an acceptable sacrifice), but she also points out that no matter WHAT you do, someone will criticize you, so there's no sense in trying to please everyone, or to try to anticipate every possible angle. That's a good thing to remember.

I thought I'd explore a couple reasons why I think my books might be objectionable and up for banning, especially if they got popular enough to be considered influential.

For Bad Fairy: It's probably pretty obvious to anyone who reads this book that it's explicitly about characters who practice magic, and they do so in an extremely Pagan-inspired way. (Hello, I wonder why that is?) The fairies go to nature rituals, use magical tools like wands and potions, refer to mythical gods and goddesses by name, and use circle-casting and spellwork procedures to affect reality. Furthermore, my protagonist practices remote viewing, scrying (telling the future with a mirror), interfering with others' dreams, and has a relationship with a goddess of death and rebirth. Later in her life she talks to dead people and uncovers an afterlife concept that contradicts traditional beliefs about Heaven and Hell, and she interferes with it. And as if that isn't enough, though Christian beliefs are not explicitly discussed in the book, there is a somewhat loose suggestion that one of my protagonist's distant ancestors may have inspired the modern concept of Lucifer. I can't imagine why this book might get banned, can you? 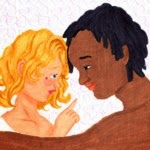 For Finding Mulligan: Well, we have teenagers in college. There are sexual references and bad language, though no actual sex scenes (or even heavy romance) and no particularly terrible words are featured. My protagonist's best friend is having sex with her teacher (well, her T.A.), and has been sexually active since age 16, but though my protagonist is more reserved than that, she doesn't object to her friend's activities. I can possibly imagine some people who want to be jackasses objecting to the interracial romance. The protagonist's alternate world has magic in it, and there are a few magical processes mentioned that people might object to if they were extremely conservative. But it's certainly way "cleaner" than most New Adult and Young Adult books. 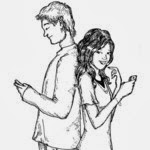 For Stupid Questions: The protagonist is a mid-twenties man and it's sort of a romance. The romantic and sexual bits occur between people who are not married, though none of them are teens. Other people in the story are explicitly revealed to have no problem with engaging in premarital sex and even one-night stands. The protagonist's love interest has unprecedented, unexplained superpowers, and there are some people in the story who explicitly subject her to religious persecution, so you could find that objectionable if you were religious because it casts religious people as the aggressors and the person they're targeting as the innocent. However, the protagonist's love interest still longs to find a religious path she can embrace and be embraced by, and eventually by the end of the story she's interested in a Unitarian Universalist church, which is shown to be less judgmental and more accepting. (That might make some people think it's got an anti-religious or specific religious agenda.) The protagonist himself is pretty non-religious and makes a couple comments suggesting he doesn't understand why anyone would want a religion. I don't think this one would be likely to be a target for banning over the sexual content since it's way less than most other books for adults, but the religious angle might be tricky.

For Joint Custody: This story isn't finished yet, but it's aimed at older elementary kids, and though I haven't made it clear yet in the part that's written, one of the major characters is from a Pagan family. (There's that heathen content again!) The Pagan family consists of two parents who are not legally married and three daughters who were raised in the faith, and they have a family ritual room which is probably pretty weird to most people. My protagonist is eleven, and he was raised Christian but not particularly strongly (you know, Christmas-and-Easter Christians who might pray when it suits them). He has divorced parents. I doubt anyone would boycott a book over divorce anymore. Again, it's probably the religious stuff that would do it in, though I firmly believe kids' literature needs to feature more "alternative" religions so kids who aren't from one of the mainstream cultures can actually see themselves in books written for their age groups.

Other novels I have planned contain (you guessed it) more Pagan stuff (an invented goddess culture on another planet) and non-straight sexuality stuff (teens in high school connecting through their GSA). And my short stories are full of bannable stuff.

Some books on the Frequently Challenged Books list that I have read and liked:

Posted by Julie Sondra Decker at 5:00 AM