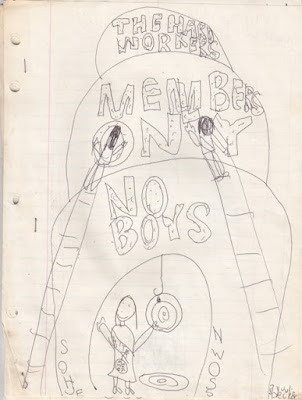 As long as I can remember, I was told that I was a girl and therefore I would hate boys until some magical transformation suddenly made me love them.

I was Team Girl, and everyone else who wasn't Team Girl was Team Boy. We were supposed to continue a standing rivalry, arguing about who rules and who drools, until romantic partnerships (of the heterosexual sort, of course) developed and changed us into men and women. (These relationships were, and are, conceptualized as both a sign of transition to adulthood AND a threshold one must cross to be considered an adult. If you "still" didn't like boys when you were a teenager, you were "immature.")

As a child, I had no idea why I was supposed to hate boys. My cartoons and books told me I was supposed to, but I didn't hate any actual boys. Despite that, I understood that membership on Team Girl was partially dependent on considering Team Boy to be my enemy, and there were no narratives that taught me either what I should do if I didn't WANT to "fight" or what to do about people who didn't fit either team (or were actually on the other team from the one they were designated). I pretended that boys were weird and gross because that was how girls were supposed to act, and it was easier to see it that way being that I didn't have any brothers.

Then the day came when a boy harassed me in the cafeteria.

I was in first grade, carrying my cheese and crackers out of the lunchroom and standing in line waiting to go back to class, and this boy just walked up to me and said "Can I have some of your cheese?" I looked at him blankly because I didn't want to be mean but I thought it was very odd for him to just walk up and want my unopened cheese snack. When I didn't answer, he simply snatched it from me, opened it, dug his fingers into the cheese and ate half of it, and then said "Now let me have some crackers," and he just grabbed a couple of the crackers and shoved the remains of the package into my hands, finally walking away like that had been an okay thing to do.

I probably cried, but I don't remember. What I do remember is telling an adult in the lunchroom and being told that boys are just like that. Boys will be boys.

They're a force of nature, basically. That's just how boys act, and maybe that's why we hate them. They take our cheese.

A couple years later I was being babysat by a neighbor and she had two kids. The younger one, a toddler, was a boy. And one day he headbutted me while I was trying to take a nap. REALLY hard. I woke up crying and told my guardian.

She defended her son and said he couldn't have hurt me because I was seven--a big girl--and her boy was just two years old. I tried to accept this and go back to sleep but then the kid kept headbutting me and wouldn't leave me alone, and the guardian wouldn't make him. The conclusion: even though I said he was hurting me, it either wasn't true or wasn't worth doing anything about, because what he was doing shouldn't bother me. When I tried again to at least ask her to make him play somewhere else during my nap, she reminded me that he was a boy and boys roughhouse. It's just what they do, and he probably just wants my attention and wants to play with me.

They're a force of nature. Again. There's no reason to ask boys to stop hurting girls. Just ask the girls to deal with it.

In fourth grade a boy on the playground kept doing this obnoxious thing where he'd sneak up behind me, put both hands on my shoulders, and jump so he'd press his weight down on me. I would usually fall down. The first time I told an adult about this, she laughed and said "Sounds like he has a little crush." I was astounded. A boy was pushing me down on the playground, but this was funny and I should take it as a sign of affection. I'm not the first person to point out how ridiculous this is--that we train girls from an early age to interpret abuse as attention we should appreciate. Weirdly enough, when responding to a writing prompt about "what do you worry about?" during a journal activity, I wrote about this incident and my teacher wrote in the margins, "I will definitely talk to him about this!" It was the first time I could remember a grown-up acting like a boy's unwanted behavior toward me was unacceptable.

In the late 1980s the song "Bad Boy" by Gloria Estefan came out. My elementary school years were partially accompanied by this soundtrack:

Get me feelin' breathless, nothin' but trouble

As I got older the "bad boy" trope became something spun as attractive; guys who bucked tradition, acted rudely, harassed others, "didn't care," or were rebellious became the cool kids, and it wasn't attractive at all for a boy to be polite (because then he was a goody-goody). And as much as this hurts girls and women, it certainly hurts everyone else too; we may not be playground enemies anymore at this point, but we're still Team Boy and Team Girl, and now Team Boy is supposed to play a certain role to get Team Girl interested. It still involves mistreating them, and girls are still trained to interpret the mistreatment as affection. Everyone--including male people--is encouraged to interpret boys as a force of nature, and we're not supposed to ask them to modify their actions for our comfort. If men change their ways for a woman, they're whipped. I guess it makes sense when an adult woman won't even tell a two-year-old boy to stop headbutting a girl because that's just what boys do and who are we to stop them?

I've spent most of my life slightly outside of a lot of the boxes assigned to me, and it wasn't too difficult for me to sidestep some of the expectations that came with being female in this world. I know I'm "supposed to" like boys and I don't. But I was still trained from early childhood to see boys and men as a force that acts upon me, and I was still conditioned to interpret any attention they care to give me as a compliment, from a little boy painfully interrupting my nap ("because he just wants to play with you!") to getting catcalled on the street ("they're just trying to make you feel good and letting you know you're beautiful--what's wrong with that?").

But you know what? I think this boys vs. girls thing is what's responsible for a lot of seemingly unrelated hostility in our world. When someone is gay (or otherwise not straight), the dynamic of how we understand men and women is disrupted. How do you have a relationship like that, anyway? Which one of you is "the man"? They just don't know how it can work if the romantic relationship isn't built on the balance we've been trained to understand as normal. If there's not one man and one woman (and therefore a Force of Nature balanced with a One Who Cleans Up After It and Tends to All Its Needs), how it is it a relationship?

We even romanticize abuse and hatred as a "real" relationship, normalizing dysfunctional relationships that exist based on this lopsided power dynamic. That Man who was once a Boy, raised on Team Boy, was told (and shown) that there are two types of people and his Team is perpetually at war with the other Team. He is rewarded for abusing and insulting the other Team, and he is taught that the playground harassment of his youth is somehow transformed into loving attention when the adult equivalents come out of him as a man. That's why we have Pickup Artist communities and men teaching men how to trick women into giving them sex through "Game" (seriously, there are actual huge communities that have developed complex rules about this and they literally call it "Game"), and that's why we have abusive relationships that others keep interpreting as normal and appropriate.

People get confused and hostile about people who do not identify as men or women, because they don't know which Team to put them on or how to push them into their assigned role. (Okay, let's not kid ourselves; nonbinary people are usually interpreted as the gender they were coercively designated at birth, and shamed when they don't model it or internalize it.) People get confused and hostile about trans people who they interpret as "changing sides" (even though that's not really what it is). People get confused and hostile about same-sex romantic relationships, or people who don't want any relationships. Because they have internalized these assumptions about how the world works and they don't know how to make those assumptions about people who are saying they don't fit the framework, so their first reaction is to react with aggression, erasure, harassment, condescension, or shaming. Make it easier for me, they insist. Be the boy or the girl so I can continue to treat you as though you are either on my Team or the opposite Team, and prioritize my ability to deal with this over your own discomfort at not fitting into that binary in the first place.

There are of course many other intersectional factors and additional reasons why people who don't fit typical male/female expectations, roles, and identities are bullied and targeted for violence of all kinds, but I think this societal dependence on boys and girls as warring factions is behind a good deal of many people's knee-jerk bigotry and invalidation.

Even as a woman who does not have or want a male romantic partner, I have to live in a world that has taught men some poisonous things about what I am to them, and I've been poisoned myself in how I should think about men. I live in a society built on this dynamic. I'm not free from it just because I'm outside some of the situations in which it would likely manifest most strongly.