A house, and expectations

So I'm pretty sure I found a house to move into!

I had quite a bit more time to make a decision if I wanted to, but I really don't like uncertainty and it was important to me to find where I was moving to so I could do stuff like set up the moving truck and make arrangements to get carpets or additional furniture and stuff. (I want to get another bed so I can have a guest bedroom, and probably a few more bookshelves and knickknack shelves.) So after looking at a few places, I found a house I liked and I applied to rent it.

I saw the house on Monday. While waiting for the real estate agent to show me the inside, I walked around to the side and peeked in the backyard. Immediately I met these two trees. 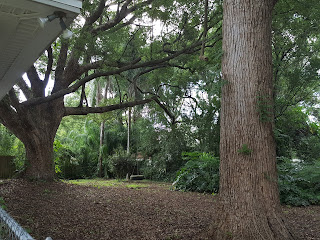 I wasn't expecting two! I saw just one in the listing's photo. So these trees will be my new neighbors. (I'm sure they're quieter than the ones I have upstairs now. Ugh.)

There was a kind of weird situation where when I showed up two other people (who were together) were also waiting for the same agent for the same time slot. Neither of us were told we'd be seeing the house together, and the agent herself seemed surprised because she thought we were all part of the same group, even though she had texted me before showing up because she was running late and they also knew her name and were waiting for her. Still don't know how that happened, but it was fine.

The house is pretty cute. It has a weird layout, kinda non-traditional with two bathrooms, three bedrooms, and an extra room with no clear purpose.

It also has a two-car garage with washer-dryer hookups out there, and there's recycling pickup which is something I really wanted since my apartment doesn't have it and I have to sneak my recycling into neighborhood people's bins on pickup nights, and it's got a kitchen that is really awesome compared to what I'm used to. (They're redoing the cabinets before someone moves in, but it's nice, and it has a little side place for if you want a table.)

The house had really good energy and so much storage space, and looked well taken care of. The front lawn is smallish with little patio stones you can walk on up to the front door. I love it, basically.

The only down sides I was worried about:

But these answers to those worries have made me decide to go for it:


After looking into my background and whatnot, I seem to have been selected to move in and September 1 is the day I have to start paying rent and get my keys. I won't be actually moving on September 1, because I have until September 30 to get out of my current place, but that will give me time to make some decisions about how to use the space before I have to lumber into it with all my crap. I've submitted everything I'm supposed to and am waiting for a lease to sign.

But here's the funny thing.

I knew it would be possibly looked at as a little weird that I'm one adult looking for a house that size, so I was very specific where I was able to be that this is the case, so they wouldn't think I had undisclosed residents or was avoiding disclosing another adult so I wouldn't have to pay application fees on them or something. After my initial application, I received an e-mail containing follow-up questions, and they wanted photos of my pets. I just said I didn't have any pets, even though that had already been a question on the application. I figured it was just a form letter anyway.

And then the next mail came advising me that my first month's rent had been accepted and they're drawing up a lease, and I need to send them my children's full names. (Plural.) So they can be listed as occupants.

As this mail was in response to a message where I'd specifically said I was a single adult with no other adults or dependents or pets, I thought it was a little peculiar. I was kinda worried at that point that they had me confused with someone else. But the representative just said okay and that's been it so far.

I saw another house after I was pretty sure I was going to get this one but before I signed for it. It was a lovely house too but I think transportation would be a problem--getting to the buses isn't easy from this place, and it would take me more than TWO HOURS to get to work. I just . . . I can't spend four and a half hours on a bus every day just to go to work. I decided it was probably better for me to go to where I can get the bus more easily and I liked the first house better anyway. (From there it's a shorter bus ride than I have now!) I took a paid ride from Uber to get there and back. On the way back, my Uber driver chatted about what I was doing (as you do), and when she found out I was a single person trying for a three-bedroom house, she was like "you don't have no kids?" I said no, and she said "then you've GOT to be a dog or cat mama, right?" I said no and she made a weird sound and said "Awww, but you NEEEEEEEEED a best FRIEND!"

I'm no stranger to people offering me pity because they think my life must be lonely or pathetic, but you know, this irked me. Even the person who's driving me home from a house visit is dismayed over my supposedly unenviable life, and it seemed like everything I did in the pursuit of my next home was set up to remind me that this isn't how you're supposed to do it. If you want a three-bedroom house, surely you have two incomes to help qualify you and you have people coming with you to occupy those rooms. You probably have animals. You probably have kids. What is a person doing with their life if they're trying to establish semi-permanent residence in such a place despite their expectation of living alone?

I'm not actively prevented from pursuing my desired lifestyle, but I did wonder whether I would be thought dishonest or suspected of being a dangerous person because my living situation is atypical. It's no secret that people immediately default to assuming the worst about people like me--we're cold, we're inhuman, we're hard to relate to, we might snap one day and become the next violent news story. For people who actually know me, that would be laughable, and many of my friends have suggested I'm one of the most warm and honest and personable and and giving people they've ever met. But on paper, if you don't have "normal relationships," people wonder about you, and assume you don't have them because you can't because something is probably off about you, and who wants to take a chance renting to someone with these warning signs if you can just as easily take the next qualified applicant, with their kids and their puppies?

Anyway, assuming everything goes forward as it's supposed to, I'm looking forward to making a home here. The kind of home I want.

Not looking forward to packing and moving, though. Not at all.

Posted by Julie Sondra Decker at 10:22 AM