So I thought I would write up a little narrative about my experience at the asexuality conference! I'll give the main bullet points in my weekend writeup, but this deserves its own story, of course.

Our story begins in Tampa, Florida, where my mom was kind enough to drive me to the airport so I wouldn't have to pay for a shuttle. After a transfer in Atlanta, I was on my way to Toronto. I'd never been to Canada before, and the only time I've ever been out of the country before this was when I went to Japan in 2003. I mostly just read a Neil Gaiman book and wrote a short story on the airplane. I didn't have any chatty plane buddies this time. Some frustrating stuff went down with the airport and the hotel--traffic issues held up the person picking me up from the airport, and communication issues prevented the hotel desk clerk to record my name properly, so I ended up doing a lot of waiting and mental cursing. But I got into my hotel room and I was the first one there by a lot.

I was very hungry after a whole day of snack foods so I decided to ignore my fear of getting lost in a foreign country and ventured out onto the street. And I found a sushi shop! That sold cucumber sushi and avocado sushi! Which I bought! And brought back to my hotel without getting lost! And enjoyed immensely!

I chilled all day updating blogs, playing online, and taking a dang nap. Finally it was close to midnight and David and Andrew finally got there. David is the founder of the Asexual Visibility and Education Network (and basically, if you don't know asexuality-related stuff, he's kind of the poster boy if there is one), and Andrew has published a bunch of asexuality-related academic papers and he's pretty great. I quote him a few times in my book.

They hunkered down to work on their computers while I tried to get some sleep. Finally at like 3 AM our last two hotel roomies arrived: Bauer and Southie wandered in after having driven from New York. Amazing that they made it! I found out later they saw me sleeping in the bed and were impressed at how I apparently look exactly like my videos. Haha. (I don't think I sleep in any videos.)

The next morning was a bit of a blur. We got up at like 7:15 and left Southie and Bauer to get a little extra sleep, and I went with the guys to the conference space. We were supposed to help set up but the long, fast walk kind of killed me (keeping up with long-legged guys while carrying all your gear in your backpack after a previous day of traveling is no picnic), so I had to rest and didn't get to do much besides set up my table. 'Cause see, I got to have my own table to set up my book giveaway.

My publisher gave me advance reading copies of the book to give away in a drawing at the conference. So before the conference started, during the lunch break, and during the Tea and Cake event, I sat at this table and let people talk to me about the book, flip through it, enter the drawing to win a copy by dropping their names in a box, and on occasion, tried not to melt over their compliments. So many people had seen me on TV or on the Internet, and they told me how much I helped them or that they like my webcomics or that they can't wait for my book. One person reading through it complimented how concise it was. I almost fainted, haha. And one man was perturbed that I wouldn't let him buy one. I guess it's not very common when you walk up to someone and say "Here, I want to give you money" and they won't let you.

After the opening events I attended a cool presentation by Ithaca, Cleander, and Andrew about the history of the asexual movement, and then I had to be on a panel: Asexual Community Leadership Q&A.

This of course is Sara Beth Brooks, me, and David Jay. I guess I'm answering questions here. The person in the blue over on our left is the sign language interpreter. We had ASL interpreters throughout the conference and I thought that was awesome. (We did have some Deaf attendees, but I was also glad that the interpreters would be on the videos so reproductions of the event were more accessible too.)

If you'd like to see the video of this panel, check it out here: Asexual Leadership Q&A!

Lunch was after this and I had pizza. I was feeling like crap and had a headache even though I'd taken medicine, but I hung out with friends and, uh, enthusiasts (I can't seem to bring myself to call people "fans"), discussing the book and my funny Asexual Bingo flier that I was giving out for free. Some people wanted to take my picture, so I let them.

Then there were more panels. I went to the (A)romantic Identities panel, and the guy running it--Brian--came up to me beforehand and basically told me he hadn't prepared for the panel at all and wanted my opinion on what he should do for it. Uh. I just told him he should focus on the different types of relationships romantic and aromantic people can have and try to make the panel audience-led. And throughout the thing he kept pointing at me and calling me the expert if I nodded at something. Hahaha. Interesting panel. And part-way through it, Michael (the main organizer of the whole shebang!) slipped me a note asking if I wanted to take the slot that was being offered by the TV station that canceled on us a couple times earlier in the week. I thought about it--because I was tired, beat, and headachey--but wrote back on the note that I would do it.

I skipped the next session partly because there weren't really any workshops I wanted to do and partly because I felt so gross and wanted to go sit at my book table. I realized suddenly that I HAD NOT HAD ANY CAFFEINE and apparently I am an addict so I ran across the street to get a soda and that fixed everything. I also took selfies with some pals.

Then finally it was Tea and Cake, so I got to talk to more people while they were in line for goodies, and after that I had to present on another panel. This one was called Asexual Visibility and Content Creation.

Brian is an adorably energetic Canadian kid (though he objected to my calling him a kid, haha) who is the founder of Everything's A-Okay, a YouTube channel and visibility organization. He presented some discussion on connecting to an audience. Amy is another Canadian kid who runs the Asexuality Resources blog and does graphics, and she made a presentation about presentation tips. (Meta, anyone?) My presentation was about the advantages and disadvantages of various media and how to use them to maximize the effect you want for message. You can watch the entire presentation here: Visibility and Content Creation!

After our panel, there was one more panel on asexuality and LGBTQ community engagement, and that one was fantastic. I ducked out a couple times to pack up my table. Then, after awesome people got flowers and we celebrated our community, we all went out to dinner. Except I couldn't really because I had to leave in a cab like 15 minutes after we got there so I could go be on TV. I ate a granola bar in the car instead of dinner. 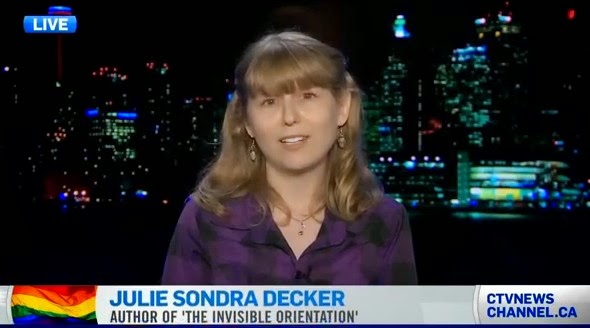 Being on TV was pretty weird. This was the last remaining type of media I hadn't actually been in--live actual TV (though I've been on a live video broadcast with the Huffington Post, but that was out of my home on an Internet-based panel). There was no "hair and makeup" prepping or anything, and it was literally a dark room with one chair in it in front of a bunch of really bright lights and this cityscape backdrop. I didn't get coached on anything, didn't know the questions, never saw the interviewer and was never in the same room with him. Someone came in to put a microphone and earpiece on me, left me in this chair where my feet didn't touch the ground, and told me to wait until I was talked to through my earpiece. I had to pretend a TV screen was the interviewer (there was no picture on it; everything was completely black) and I just talked back to the disembodied voice and pretended this was totally cool and normal. Haha.

I'm astounded that my hair didn't look like crap. I hadn't brought a brush, had no makeup on, and had gotten up at 7:15 that morning with absolutely no chance to freshen up. This interview was at 9 at night. All I can say is those lights must be magic. Check out the very short interview if you want.

Cab fare was murder but I got back to the hotel and everyone else was still at dinner. I got to take a shower and chill in peace. And when Southie and Bauer came back, they were super tired too, but we all chatted about the conference and all the different experiences we've had with our asexual activism. Bauer had brought planet cakes! I ate them and shared my Goldfish crackers. Poor Southie was nerding out on the computer uploading her photos from the day but she was so tired it was like she was drunk.

Eventually Andrew came back, and even more eventually David wandered in and appeared pretty drunk, and decided to go back out to party with his friends more. He didn't come back. Who knows where he slept. That party clown.

I had to leave super early the next day and a cab was waiting for me. There were no glitches flying home, though I got a tweet right before I left for Atlanta that my CTV interview was up on the website. I retweeted it without being able to watch it, having no idea if I looked terrible on it or what. Glad I didn't. (I watched it with my mom after we were back at my house.)

And I found out that apparently you can have your phone in roaming mode internationally for 2 days and rack up over $900 of charges. So . . . yeah, that had to get fixed. (It's fixed. Don't worry. But yeah, had to turn my data on to iron out the hotel problems, which I won't go into, and I was ready to pay the consequences. I wonder how much each tweet and text cost me, all told?)

Anyway these are my knees extremely far from the airplane seat in front of me and I'm showing it to you because I want you to be jealous of my short legs. 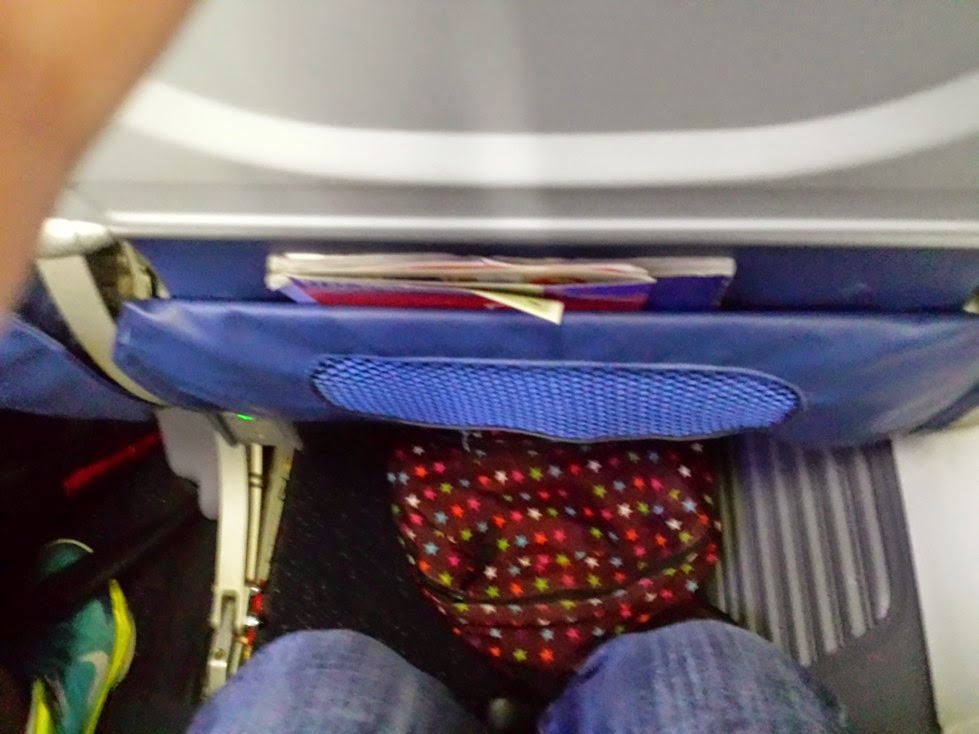 I did the drawing to see who would win the book the next day (and I posted a video of it), and I e-mailed the winners Bessie, Jessica, and Sarah. :) So far one of them has not replied but the two who have said they wanted their books signed. I haven't ever signed a book before, but there's a first time for everything. :)

Hope you enjoyed that!


Posted by Julie Sondra Decker at 9:30 AM

Email ThisBlogThis!Share to TwitterShare to FacebookShare to Pinterest
Labels: asexuality, me in the media, networking, personal, photos, vacation, videos