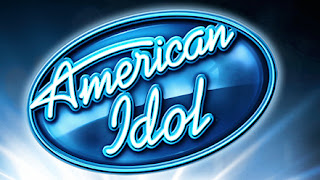 I was just thinking about how trying to publish through mainstream channels is kinda like auditioning for American Idol.

Like, okay. You enjoy doing your thing. You might do your thing in such a way that you've shared it with others, and sometimes those people who are close to you either don't have the perspective or don't have the heart to tell you you suck at it. Sometimes you've gone way beyond your family and friends to show them your art and you've taken the criticism in stride and you've improved. And sometimes there are just a few completely raw but completely amazing talents in there. All of them show up at the same audition. All of them are querying the agents.

That's where I am. So I got picked out of a huge swath of people and identified as someone who might have something marketable. And I know that could turn out to not be true if my book never sells. I might never make it past Hollywood. I might flunk out in the group round, or get cut before I even get to the part where America votes. Making it to Hollywood sure as hell doesn't mean you've made it. It just means in this context, at this time, someone judged you to be better than most of what they've seen today, and someone thought your output is reasonably similar to what's already succeeding in the market.

So, say you get through all the dramatic pre-recorded rounds and you make it to the live shows. You know, as in, your book sells. Then it's up to the popular vote as to whether you succeed. You presumably needed some amount of talent and skill to get where you've gotten, but if your stuff isn't popular and no one likes you, you can get booted pretty much just as you begin. Even if you feel like you've come so far. So, what, then? It's all over?

Every year, someone wins American Idol. Every year, a few debut authors get six-figure publishing deals. But it's what they do with them--how they go on from there to make their debut turn into a career--that determines whether winning the jackpot is going to lead to being a one-hit wonder or if it's going to lead to being J.K. Rowling. We're still hearing from the most successful American Idol winners: Fantasia, Kelly Clarkson, Carrie Underwood. And yet others who took the top spot more or less disappeared after doing so: Lee DeWyze, Taylor Hicks, Kris Allen.

But you don't have to win to make it huge. Adam Lambert, Chris Daughtry, and Jennifer Hudson are huge names that took off after not winning Idol, and a lot of the people who didn't even make it to the live shows ended up getting opportunities for their careers once they got a little exposure.

And obviously, American Idol isn't the only way into the industry. Most successful musicians do not launch their career through that show; it's for a particular type of performer, within a narrow set of limits, aiming for a particular audience, competing against people who aren't much like them. The mainstream publishing world is the same. Not everyone sells to a major company immediately. Not everyone sells to a major company at all. And some don't even bother with agents; they self-publish and become the equivalent of an indie musician who suddenly got discovered and signed to a major label despite spending almost no time playing gigs.


Those lottery-like success stories help mask the fact that nearly all aspiring musicians play and play and play and their most successful gig is a crowded bar at open mic night. Which is fine if they're satisfied with that and enjoy it. Similarly, nearly all authors looking for representation with an agent don't get signed, and most self-published authors sell comparatively few copies unless they get lucky and/or have some marketing talent, but some people remember E.L. James and Christopher Paolini and think they're likely to get discovered the same way. There are so many paths into this industry, and so much of what affects your chances is completely out of your hands.

It's not just about being fantastic at what you do. It's also dependent on whether other people think so and whether you're in the right place at the right time for them to find you. If you're fantastic at what you do, yes, you have a much better chance. But let's not discount the personal opinions of the judges, who have been known to vote down people who had amazing careers later. Let's not discount the ability of the artist to hack it after they get to the serious part; some of them can't.

And let's not discount the audience vote. . . .
Posted by Julie Sondra Decker at 7:34 PM